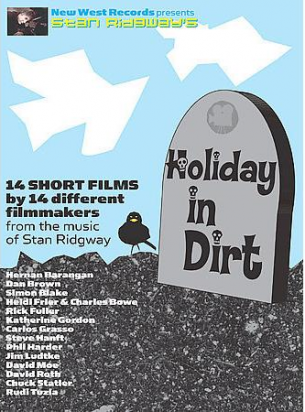 Holiday in Dirt was my first big multimedia project. The idea was to take great film and videomakers and let them each pick a song off of the Stan Ridgway album “Holiday in Dirt” (a compilation I produced and released through NewWest records and RED…  I also did all the art). The filmmakers could do anything they wanted within a set of parameters, but with a budget of only five hundred dollars. (Or less than the price of a day’s catering on the kind of sets that all these folks were working on.) The result: some amazing people made some truly stunning work. The who’s who of directors include digital pioneer Jim Ludtke; the guy who invented the music video, Chuck Statler;  Phil Harder, Carlos Grasso, and Rick Fuller, who co-produced the DVD with me.  Available on Netflix.