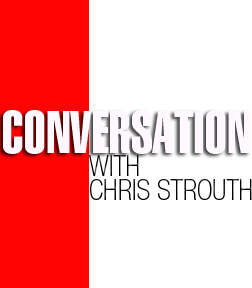 Conversation was a television program that I created, produced and hosted to be broadcast on KTCA.  The idea was to create an evergreen talk show, something like Dick Cavett or Person to Person. It would literally be a conversation–sometimes the telling of stories, sometimes history or whatever else popped up.  In taking this different approach to interviewing, the viewer got to see some very different aspects of the subject.

The show was filmed in B&W, with no zoom lenses, using six cameras (the standard chat show of this budget is two-three). Slightly off beat angles  and expressionistic lighting gave it the feel of being from no time in particular.  All told around 15 episodes were filmed, with guests ranging to musical legends like Grant Hart to  a psychologist that treats sexual deviants  by teaching wood carving.  Anyone was fair game as a guest as long as they had a good story to tell.

The program is currently in a limbo status after an amicable split with the production organization with which I worked on it. Currently there are talks to bring the existing  episodes to light in a web series…

But Just for you here is the pilot episode with Mpls legend Dave Foley.