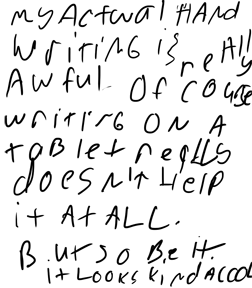 I started writing essays on a professional level in 1996 when I was asked to do a column for America Online’s Digital City. Entitled “Dig the New Breed”, it started its life as a music column telling you all the cool new bands and at the same time talking about my life as a toiler in the sweatshop of show biz.  To my and everyone else’s surprise it became a hit, becoming the most read feature for Digital City Twin Cities and one of the highest nationally.  The column also became less about music and more just about my life; taking my cat to the vet, or the courtship of the woman that would become my wife. The numbers led to a second feature, “Ask a Slacker”, an advice column from the Gen X perspective.  “Dig the New Breed” found its way into print in Bosnian newspapers as well… yes, you did read that right. For whatever reason people in strife-ridden Bosnia got to read my ramblings, mostly in a smaller independent weekly that for the life of me I don’t know the name of, but saw my editor once a month translate it all into Croatian.

This led to more writing: a regular column in Pulse (a TC weekly) called “Our Friend Electric”; work for Request, Revue and others, a large essay in City Pages, and other bits here and there.

I have also done a fair amount of ghost writing, written three plays (“Tales of the Enchanted Tiki Room”, “Teen Age Makeout Party” and “Click”) and the text for numerous of my own performances.

A few pieces for your consideration:

Foetus in Fridley- from City Pages

It’s Raining in Warroad– from Future Perfect The American Way

Letter from Kurt- an excerpt from Teenage Makeout Party

How Social Media Saved My Life