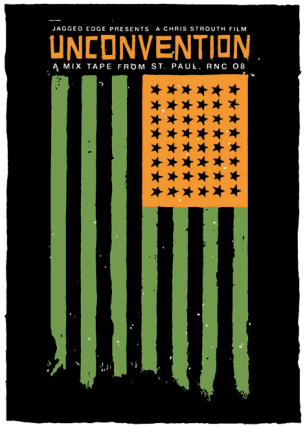 “Unconvention, a Mixtape from St. Paul” is a feature length documentary I produced about the 2008 Republican Convention.

Political party conventions are not known for being memorable, except of course when they are. 1968 ring a bell? For four days in September of 2008 the Republicans took over the sleepy city of Saint Paul and it became, in a very real sense, a battleground. Smoke bombs, percussion grenades, pepper spray and journalist arrests bid for attention with policy, Palin and McCain.

It was a convention unlike any other: The party of the least popular sitting president since Hoover, a hurricane, and a lot of protesters. Another new addition: an army of independent journalists to cover it.

Unconvention is a film about all of this, told through the eyes of the media. Ultra-conservative, ultra-liberal and everything in between, this is an abstract portrait of a very concrete process, remixed into a new linear whole.

The film uses a collective process to tell a collective story, using found footage from dozens of journalists, citizen journalists and just plain citizens. A mash-up of modern media, from HD to cell phone cameras telling the lost story of police, protestors and civil liberties.